I’ll wager anything that that’s what animals would say if asked their opinion on whether they’d like to live out their lives and die a natural death or visit a slaughterhouse.

Lately I’ve been stuck on the idea that most people don’t really consider the horror involved in the transformation that takes place to go from living, sentient being to product under plastic wrap in the supermarket, so here are just a few of the lovely people that an animal will meet and the jobs they perform during the disassembly process of someone’s mother, father, son or daughter.

3. Knocker operates knocking box; uses air gun to drive captive-steel bolt into foreheads of cattle while they are suspended on center track amd restrained by side walls.

4. Shackler shackles rear left hind leg of cattle with chain suspended from overhead rail; can shackle either before or after knocked cattle fall onto green conveyor belt from which they are lifted up by the chain.

7. Presticker uses hand knife to make incision along length of cow’s neck, giving the sticker access to jugular vein and carotid arteries. Must take care not to be kicked in face, arms, chest, neck, or abdominal area by cows that are reflexively kicking, or kicking because they have not been knocked completely unconscious.

8. Sticker reaches into the incision made by the presticker and uses hand knife to cut jugular veins and carotid arteries of cow.

9. Tail ripper uses hydraulic scissor-type knife to cut off bottom third of tail; disposes of this down a chute; uses hand knife to make incision from the anus to the teat or penis area.

13. Belly Ripper uses hand knife to make incision down length of cow, starting from udder or penis area where the tail ripper left off and continuing to about mid-chest level.

14. First Codder uses air knife to skin inside thigh of right leg, picking up at point where first legger left off.

18. Trimmer uses handheld trimming knife to clear area behind right hind leg and anus of fecal matter and hair; position exists primarily in winter when there is more fecal matter on cattle.

And on and on for 121 steps at the slaughterhouse.

The preceding steps are just a short excerpt from the excellent and painstakingly well documented book Every Twelve Seconds by Timothy Pachirat (whom I happen to know), the book is about much more than this, but today I wanted to point out how matter of fact and routine the job’s descriptions seem, as if they were simply assembling a new car, or in this case disassembling a car, in fact it’s been said that Henry Ford got the idea for his automotive assembly line after seeing the disassembly conveyor in a Chicago slaughterhouse.

These things should never be allowed to become a routine part of everyday life (for humans) or death (for animals), and yet they are, and this is something that happens to another cow every twelve seconds just in this one slaughterhouse in Omaha every day, let alone all the other slaughterhouses in this country and the world, and for those of you talking about how you’d only buy (happy) “humane” meat, those animals meet the same end as the others.

Show me where the “humane” is in that.

Don’t support this shit, you don’t need to.

This is not the place in Timothy’s book, but another slaughtersouse. 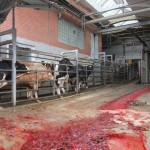 4 thoughts on “Don’t disassemble me”